Bob Moore, the founding director of the Denver Gay Men’s Chorus passed away in February.   Thank you Deb Pollack for providing this beautiful obituary.

Robert M. Moore, an unapologetic and unabashed original who spent his life building community through music, died at his historic Cheesman Park Denver home of natural causes on February 13, 2021, he was 78. Best known to his legions of friends, colleagues, and students as Bob ‘Melba’ Moore this gifted, eccentric, musician, storyteller, raconteur humorist with a wry and sharp wit, and an endlessly curious creative force of nature leaves behind a legacy of music, ministry, community, and endowed nicknames for those in his circle.

Bob was shaped by profound transformat 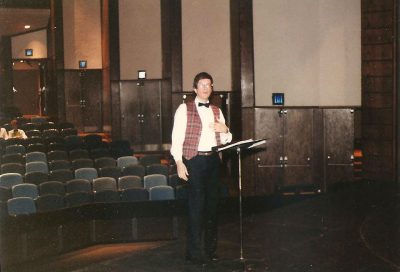 ional events that created sources of growth and catharsis for him throughout his lifetime. He loved the church music he grew up with, loved the community he found at churches and loved working with children. Bob was recognized for his leadership traits early and while in college by the Dean of Students at West Virginia University even as he was deeply conflicted by his sexuality, the suicide of his father when he was a sophomore incollege and loneliness. Bob ‘came out’ to his sister first who accepted him unconditionally and they remained close throughout their lives. When he came out to his mother he was accepted and acknowledged by her which was deeply and vitally meaningful to him. She furthered her support of him when she attended and became a member PFLAG even attending the 1984 PFLAG National Convention with him in Denver. He remembers that after hosting his friends for Thanksgiving at her home in Silver Spring, MD she said, “If this is how gay people are, there should be more of you in the world.” 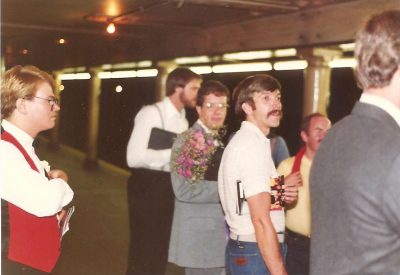 g love affair with the Show Boat medley was born at WVU when he accompanied his fraternity’s competition-winning glee club in his senior year. Still living at home with his mother, Bob turned to music, education, and the seminary as he pursued his masters at the University of Maryland. He taught as a graduate assistant, was the organist and choir director at his home church and then went to Kent State to pursue a PhD in English where multiple events were to profoundly change his personal and world view forever. Bob’s intolerance for the injustices of the world was born on a Monday at 11am while on campus on May 4, 1970, the day of the Kent State Massacre. It was also at Kent State when Robert Shaw of the Atlanta Symphony came to conduct a requiem community concert that Bob sang in and when he had a “transcendental healing experience and the most profound musical experience” of his life. During this time Bob continued to struggle with his sexuality brought even poignantly to the front as was, multiple times, denied ordination as a Methodist minister despite being qualified and blocked only because he was openly gay. Bob tried change therapy and then found a good therapist who helped free him and encouraged him to “be gay socially” and to “don’t fight it, enjoy it.” It was during this time that his friend and mentor, Bishop Mel Wheatly, encouraged Bob to move to Denv 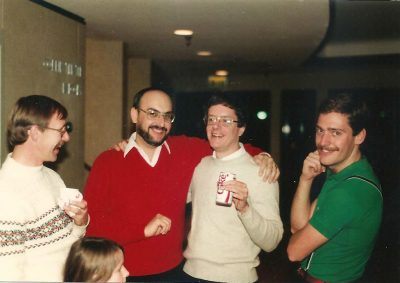 er to be in his conference and when Bob realized that his life’s ministry was building community through music. After moving to Denver in 1980 Bob began teaching at St. Jude Catholic Church where he taught the parable of Jesus and feminist theology.

Bob was born in Washington, DC January 14, 1943 to parents Margaret Sullivan and Martin Luther Moore. When he was seven years old the family moved to Silver Spring, MD where grew up and where he graduated from high school. He received his undergrad degree from West Virginia University, his

It was during the dark shadows of the HIV/AIDS crisis that Bob’s true ministry came to light via his drive to create community. He knew that sharing music and a covered dish meal could be a substitute for bars as well as an anecdote for the desolation, sadness, loneliness of the time. He gave the Gay community an opportunity to meet and be creative and in 1982 when he founded the Denver Gay Men’s Chorus. Their first concert, From the Silence, debuted at Denver’s Aladdin Theatre in June 1982 with 74 singers and a program that included Bob’s beloved Show Boat medley as well as “We Kiss in the Shadow’s” from Rodgers and Hammerstein’s The King and I. A legacy was born over these two nights of concerts when audiences of 1,300 leaped to their feet for a standing ovation for this new chorus that had the audacity to put the word ‘gay’ into their name for all to see. In their inaugural year, the DGMC went on to sing at the Gay Games in San Francisco and at Lincoln Center in New York for the first GALA Concert festival. The chorus became a ministry in and for themselves as they sang for many funerals and memorials of their members as the HIV/AIDS crisis continued to ravage their ranks. Bob, ‘Melba,’ tells the story of a member, Roger, who said “I’m not dying until the chorus sings for me.” He went on to say that “it was as if I started the chorus for this purpose…but it helped many of the families… [when we] sang ‘Somewhere Over the Rainbow.’”

Bob didn’t stop there. He was one of the founding organizers of the GALA Choruses, a North American organization dedicated to changing the world through song, which was created in 1983 at the Gay Games and went on to host their first leadership conference in Denver in 1984. Bob was instrumental in supporting other choral directors especially Carol White who created a mixed chorus to perform at the PFLAG National Convention and then went on to help found the Denver Women’s Chorus. Bob spent his life in service to the DGMC and played many roles not only as founder,  but as a director, co-director, accompanist and singer. Ultimately, with an amazing sense of humility and grace he settled into the Grande dame support role many remember him for. He spent hours happily greeting, chatting, and sharing stories with members as they arrived and checked in for rehearsals all the while endowing the lucky ones with cherished nicknames that they will remember forever as given by ‘Melba.’ To honor his life of service the DGMC created the Robert MooreLegacy Award with Bob as its inaugural recipient and the Robert M. Moore Legacy Circle in honor of his estate planning gift.

Bob deeply believed, because he had lived in its power, that music could be transformational and healing. By creating the DGMC he got his sought-after self-confidence, the ability to love himself, conflict resolution skills and the gift of living life to its fullest as an out-loud gay-person. He was ever curious, ever-learning, and eccentric in his varied tastes. As his friend and DWC’s member Janice Tilden wrote in a tribute to Bob said, “He found people who were interesting: composers, liturgical dancers, harpsichordists, oboists, people in early music and avant-garde ensembles. Somehow, he brought all these disparate parts together under one ecclesiastical roof, and they worked.” His favorite chorus pieces were “Testimony” by Stephen Schwartz, “From the Silence” by Dick Kramer and the Show Boat medley. 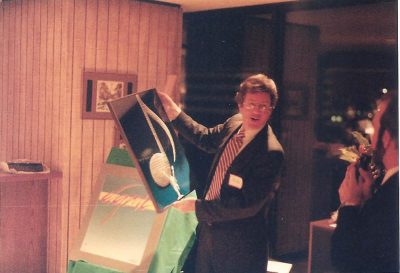 Bob is survived by his sister Mary Jo Moore of Berlin, MA; brother and sister-in-law William Joseph and Judy Moore of Silver Spring, MD; his beloved cat Kitty Diva; and an extensive and loving community of friends, colleagues, students, and musicians who have forever been changed by this humorist, teacher, and minister. Bob eventually found his church and his pulpit where he preached inclusiveness, peace and healing through the music that threaded through his life. We are all the better for having known this gentle, kind, and creative man.

Bob worked with Sage Singers up until the time of his death. His life story, told by him in his own words, can be accessed and heard at https://lgbtqcolorado.org/programs/lgbtq-history- project/oral-history/ as part of The Center on Colfax’s Oral History project.

Memorial donations in Bob ‘Melba’ Moore’s name can be made to DGMC, PFLAG or to The Center on Colfax. Due to COVID, a small, RSVP-required service will be held in March.  Please contact James Knapp for more information.