On October 16, DWC presents March. Sing. Vote!, an online choral event celebrating the 100th Anniversary of the 19th Amendment and the struggle to win voting rights for all women.

Fall 2019 was my first season with the Denver Women’s Chorus. I had been attending DWC concerts for a while and was hopeful that I would join those beautiful, strong voices one day. The concerts’ themes were always great – filled with energy and touching on issues relevant to the times. When I joined and learned that the upcoming series would be dedicated to women getting the right to vote, I knew I had been put in the right place at the right time. Both my undergrad and grad degrees had a women’s studies focus and I had found it so fascinating to learn about the dedicated and fierce women who spent their lives ensuring that generations of women after them would have rights many of them never even got to enjoy. I had been equally dismayed to learn how they had left their sisters of color behind in the struggle, and that it would take decades for many to get that same right to vote. 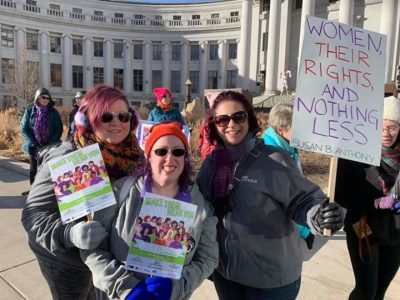 In Lifting As We Climb, Joan Szymko was able to take so much of that history, both the achievements and the failures, and put it into song. My heart was full – women’s history and singing – together! So many of the lyrics spoke to me. They wove together the history of women’s rights in the United States until it came to life and then brought it back to the present, highlighting some of the issues being played out currently, in an election year 100 years later.

Every time we sang those lines, I was once again reminded, not only of the struggle that women and their families had endured to ensure other women got the right to vote, but of the importance of voting and continuing to show up when that right is threatened for any and all in our society. The 19th Amendment was the single largest voting rights expansion in our nation’s history, yet voter suppression continues to be an issue across the nation today, making it harder for many groups of people to exercise their right to cast a ballot.

The parallels of citizens fighting for women’s right to vote in 1920 and citizens fighting for an equal and fair election in 2020 is not lost on me. Throughout history, we have seen people willing to risk it all, not knowing if they would get to reap the rewards from the battles they fought. Voting is one of the most important things you can do for yourself and your community. Make sure to make your voice heard – now and always. March. Sing. Vote!