March, Sing, Vote! – Why we are singing “Lifting As We Climb” 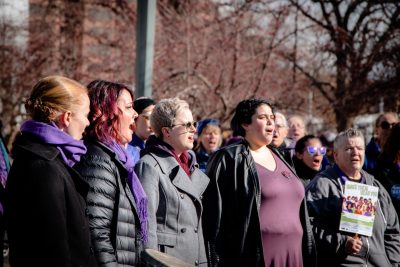 Back in the Fall of 2018, the Denver Women’s Chorus made the decision to join with other GALA treble choruses across the country in co-commissioning an original choral work commemorating the ratification of the 19th Amendment. We received updates on the text and the length of the piece, but we didn’t yet know what the music would sound like or how the work would address the controversial and often oversimplified story of suffrage. As we began to rehearse the work in August 2019, I was relieved to see that composer Joan Szymko had strived to amplify the voices of Black suffragists and help audiences to understand how the movement evolved to ultimately focus on suffrage for White women at the expense of women of color, many of whom had fought alongside them.

As we approach the 2020 elections, we wanted to share this work again, titled “Lifting As We Climb,” in its entirety, as both a celebration of the ratification of the 19th Amendment that granted some American women the legal right to vote, and as a call to action. The right to vote is fundamental to our democracy and must be protected. Today, one of the best ways we can honor all the women who sacrificed for decades fighting for suffrage is to register and vote. We hope you’ll tune in on October 16th and join us for March. Sing. Vote!

Previous Post
Toast the 2020-2021 Season!
Next Post
DWC’s Terwanda McMoore reflects on the importance of voting ahead of March. Sing. Vote!
Menu