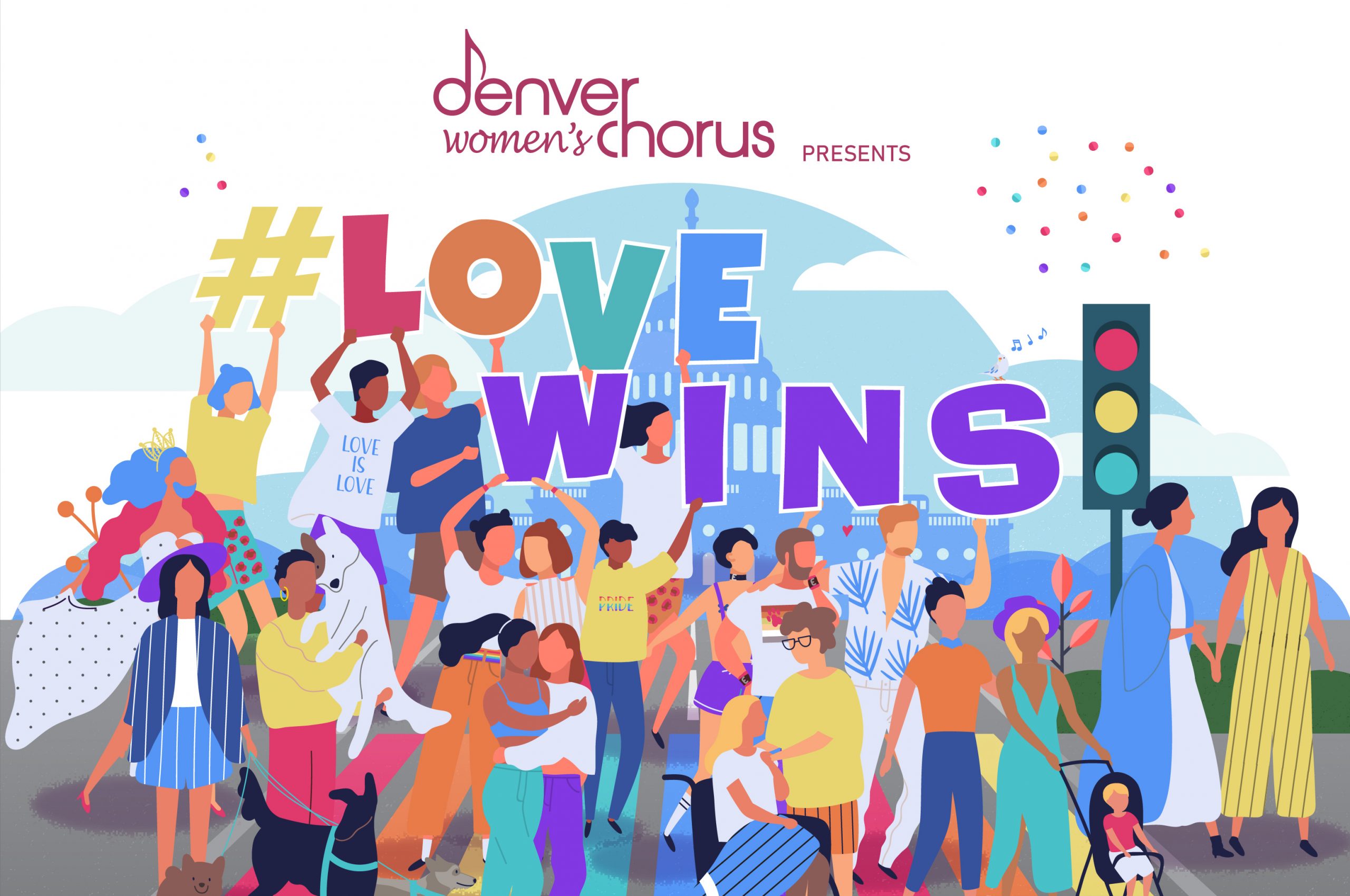 In 2020, DWC planned a May concert to celebrate the five-year anniversary of the case that assured the right of all people to marry. Then the pandemic happened. Over the past several years, we have struggled to hold onto the belief that love really does win. The meaning of this concert has evolved over time from a celebration to a reassertion that “love is the answer.” In order to have hope for our future, we have been reflecting on the progress we have made as a country and reimagining how love might motivate us to push further. In the face of harmful legislation that is spreading across the country, we look to the past triumphs to remind us that we can do it again. Here’s what we’re remembering today.

The Defense of Marriage Act (DOMA) was signed into law in 1996 and defined marriage as being between a man and woman. DOMA allowed states to deny marriage equality, including denying same-sex couples from receiving the many benefits available to other married couples under federal law.  There were many cases challenging DOMA over the years, with a few key cases making their way to the Supreme Court.

United States vs. Windsor (2013) – Edith and Thea were married in Canada in 2007, although they had been together for over 50 years.  Thea died in 2009 and left her entire estate to Edith, but Edith was barred by DOMA from claiming the federal estate tax exemption for surviving spouses. Edith filed suit in New York when the IRS denied her a refund of the federal estate taxes paid. Edith’s case was eventually successful in getting Section 3 of DOMA repealed (referring to the definition of marriage and spouse) by the Supreme Court, but Section 2 remained (allowing states to refuse to recognize same-sex marriages).

Hollingsworth v. Perry (2013) – After a series of U.S. federal court cases starting in 2009, on June 26, 2013, California’s Proposition 8 (which had amended the state’s constitution to define marriage as a legal union between a man and a woman) was deemed unconstitutional by the Supreme Court.

Obergefell v. Hodges (2015) – On June 26, 2015, the Supreme Court ruled that the fundamental right to marry is guaranteed to same-sex couples. The 5-4 ruling required all fifty states, the District of Columbia, and the Insular Areas to perform and recognize the marriages of same-sex couples on the same terms and conditions as the marriages of opposite-sex couples, with all the accompanying rights and responsibilities.

Along with many other states, Colorado citizens were also trying to chip away at DOMA through numerous lawsuits and repeal efforts during this time period.

Brinkman v. Long and McDaniel-Miccio v. Hickenlooper (2014) – After being denied a marriage license, a lesbian couple filed a lawsuit in the Seventeenth Judicial District (Brinkman v. Long). The couple were joined by nine other same-sex couples a few months later (McDaniel-Miccio v. Hickenlooper). The CO district court found that Colorado’s same-sex marriage ban violated the plaintiffs’ guarantees of equal protection and due process under the Fourteenth Amendment to the U.S. Constitution.

Colorado ex rel. Suthers v. Hall (2014) – Boulder County Clerk Hillary Hall had been issuing marriage licenses to same-sex couples. State Attorney General John Suthers filed a motion in the Colorado District Courts in an attempt to stop the Hall’s actions. As the attorney general’s motion was being heard, the Seventeenth Judicial District struck down Colorado’s ban on same-sex marriage as unconstitutional in Brinkman v. Long. On July 10, 2014, a day after the ruling in Brinkman, District Court Judge Andrew Hartman found that while the Boulder clerk violated the law, “There is little argument that Clerk Hall is engaging in a form of civil disobedience.” He refused to impose a restraining order or injunction upon her.